This tough bunch of veterans are the result of several years of fighting on the Rhine frontier. They have lost their light Pilum for the heavy throwing spear and have adopted many of the fighting techniques of their German foes. 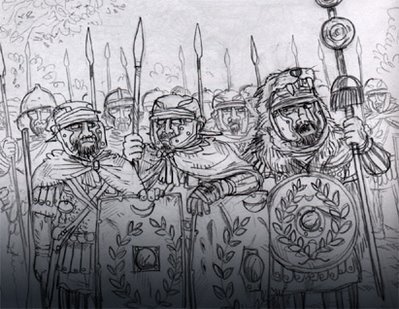 They wear local clothes and have aquired the taste for beer over wine, It would be fair to say that after seven years on the Rhine, the XXI RAPAX have gone native.

However, their constant fighting and campaigning have made them some of the best trained troops in the Empire.
Posted by Secundus at 9:14 pm

Hello everyone, I have good news and bad news. The good news is my blog is now quite large and successful, the bad news is that now I have started to get advertising Spam all over it. So all it means is, when you leave a comment you just have to type in the letters below to publish it. Cheers, Simon.