The month of August started well for Secundus also, with the descovery of a silver mine in Upper Brittania. Store houses were also constructed in the provice of Belgica so supplies could be gathered from the homeland.
With his own force still grumbling about pay, Secundus started to enlist fresh units from the German XXI Legion and soon a sizable vexillation had been recruited. These men were a ragged bunch and looked more like the Barbarians they had been fighting than Roman soldiers, But Secundus knew they were some of the best troops in the Empire.
However, this last insault was to much for the British legions and on the 12th September three whole Cohorts of Auxillaries ( mostly spainish) defected to the army of Tullus stationed in Tarraconensis. Secundus managed to stem the flow and quickly put the other units into road building to fill up their days 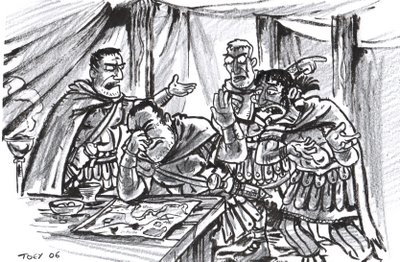 , but the fact still remained he had lost a third of his invasion force to the enemy. Curse the Gods!
Posted by Secundus at 2:42 pm