The legend of Tullus grows (campaign 30) 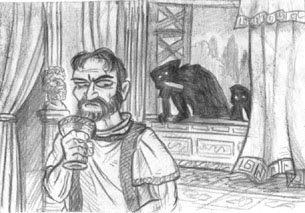 It was while in Africa, that the story of Tullus's failed assassination attempt started to circulate amongst the men. Tullus had killed two assassins while in Hispania single handed, this figure now rose to eight with Roman propaganda. With the story bounding around the camps, Tullus's popularity grew and his men loved him all the more for it. Here was a man truely favoured by the Gods.

In game terms, Tullus is now classed as a 'good General' and receives a +1 on certain tables, this plus is also applied to his stats on the game board.
Posted by Secundus at 12:27 am

Damn you Secondus. Stop wasting your denarii on assassins.