With the Rhine re-enforced and the German problem quelled, Secundus appeals to the Senate once more, to back his cause. 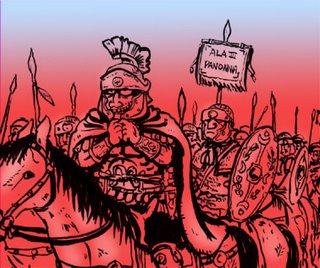 Lucius Plaudicus, a haughty noble of high birth mocks Secundus in public, laughing at the thought of one of such low origins becoming Emperor. " second by name....second by nature" scoffs Lucius in the Forum.

Secundus is not known for his patience, and decides that he will not ask a third time. He mocks back in return "there is no third chance with Secundus!" Meanwhile alot of other senaters begin to realize, Secundus is alot closer to Rome than Tullus and his spainish armies. Rome is thrown into chaos as parties devide and argue over what to do.

Secundus straps on his helmet for battle and looks forward to meeting Lucius face to face.
Posted by Secundus at 1:04 am