The month of August started well for Secundus 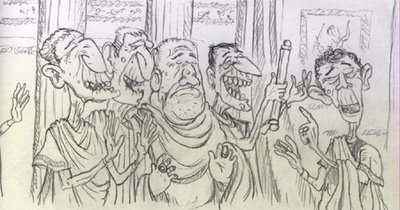 when a small raid on enemy supply routes paid off, however this goodluck was short lived. Secundus was now in a position to invade the capital of Rome and sent a bribe to help the process along.
The Senate turned him down flat, they took the bribe but laughed his messengers out of Rome.

Secundus took the news very badly and stormed around the camp cursing and vowing that now he had the German legions on his side, It would soon be him who'd be laughing.
Posted by Secundus at 1:07 pm

I think this drawing is even more excellent than the usual high standard on your blog. Do various of the senators have names and characters?

Thanks, I wanted to get over the unscrupulous,fiddling,dishonest, unethical,bribable characters of those rotten senaters. They haven't got names yet, but all that can change. Maybe you'd like to choose one and name him for the campaign? Secundus has got alot of scores to settle with that lot!

Sounds cool. On closer examination, the senate is composed of some wonderful characters.

Lucius Plaudicus is one such. Boasting patrician bloodlines back to the founding of the republic, his haughty advocacy for and practice of 'Roman morals and traditions' sets him apart from his more pragmatic colleagues.

Relying upon what he sees as his great wit for protection from the ridicules of his fellows, he pontificates ad nauseum given half a chance.

The senate tries to reserve his speeches to the hour after lunch.

Do you mind if I put up a copy of this picture on my blog (attributed to 'Simon of Iron Mitten')?

Of course not...It'll be an honor.

Which character in the picture do you want to be Lucius Plaudicus? They look like they could all fit the bill and there's even a fat one in there for good measure....the choice is yours.

Pleader here (commenting from work anonymously). the little scrawny guy pontificating to the others looks like a Plaudicus to me.

The big fat guy looks like a too spoiled wannabe soldier, kept in the senate to save an army, who hasn't realised that that's what's happening.

they all seem to have very evocative pictures which make's a character come to mind.