Febuary in the new year opened well for Tullus, with the descovery of a salt mine in Mauretania Caesariensis.
When news of Secundus's march on Rome reached the ears of Tullus, he decided it was time to make a strike of his own. Tullus had so far played it safe recruiting in Africa and the outskirts of the Empire, now, he ordered his Legate in Tarraconensis to invade Gaul. Lucius Silius Famia marched an army made from vexillations of the VII Gemina and the newly recruited III Augusta into the Gaulish province of Narbonensis.
For the first time since the war began, the two sides now faced each other across a frontier. 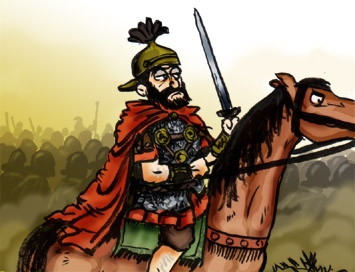 By this simple move, Tullus had put pressure on both Gaul and on the capital, Rome itself.
Posted by Secundus at 8:24 pm

I am new reader of your blog and this one looks perfect and one that needs to be follow. Going to bookmark your blog to read more such stuff. Thank you for sharing it with us