Victory at the battle of Arretium (campaign 46)

Secundus rode out to meet the army of Rome near the town of Arretium in northern Italy. The battle is long and bloody with both sides taking turns to win ground, only to lose it again a moment later. To everyones surprise, the Praetorian guard 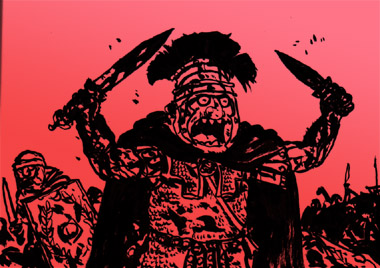 fought well and almost turned the battle at one point. However with the weight of numbers on his side It was Secundus who triumphed in the end, forcing the army of Rome down into a number of river gullies, where it was cut to pieces.

Centurion Vitus celebrates victory after the battle with his Gallic warcry.
Posted by Secundus at 1:36 am