As a young officer Alanicus earned his name fighting in the deserts of the East. Holding back the endless waves of nomadic peoples was like trying to hold back the shifting sands his commander once said," as soon as you think you've got them, they melt away again only to appear behind you". Alanicus was a lot older now but his experience fighting these nomads in the sands had not been forgotten. 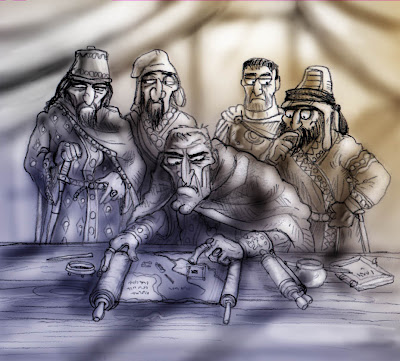 These people with their hit and fade tactics could be put to good use for the Alanicus cause. With this in mind, Alanicus started to restructure the Army of Syria, stationing large numbers of Auxiliaries to garrisons and replacing them with fast, mounted nomads. He had come to respect the Syrian bow at first hand and now drafted hordes of their archers into the army. A heavy unit of Cataphracts was also sent down from Armenia to give them some back bone. Alanicus was crafting a swift, agile killing machine that would make the sky rain with arrows and the ground thunder with hooves. 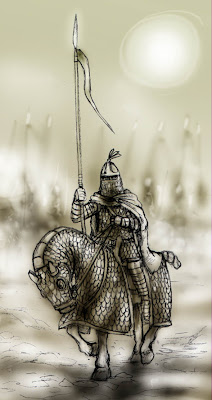 Armenian Cataphracts bolster the Army of Syria, giving some heavy weight to the units of bowmen.
Posted by Secundus at 5:01 pm

Oh wow. Simon, that is one beautiful cataphract.

I want that framed for my wall! :D

Consider it yours Alan, you can have the pen drawing at least. You may have to print out the posted illustration for a coloured copy. Your love for all things 'Cataphract' knows no bounds! Your armoured Armenians are on their way...not long now.