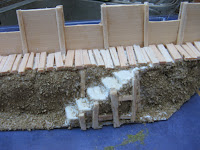 The back of the earth rampart was flocked with grit to give it a real earthy look and the details were added to the stairs. 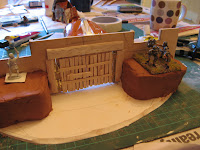 The Gatehouse was given large ramparts for Artillery emplacements (Scorpios). I also started to give some thought to a tower over the gate its self. The gates were given a cross bar to add extra detail. 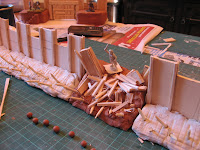 With some left over clay, rather than just let it go to waste, I decided to make a breached section for the wall. I knew this would come in handy and could be sloted in anywhere within the wall sections. 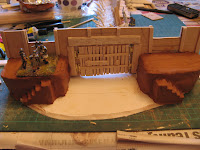 Steps were added to the Artillery platforms and again, figures were used for size reference.