After months of misfutune, Tullus moves up into Aqutania, where his luck starts to change. The large open grasslands provide an excellent horse stock for his growing armies and Tullus soon replaces many of his cavalry mounts with superior Gallic stock.

Tullus also starts to recruit large amounts of troops stationed in Gaul, drafting them together to make another army. This is the third field army to be raised and join the fight in the name of Tullus. 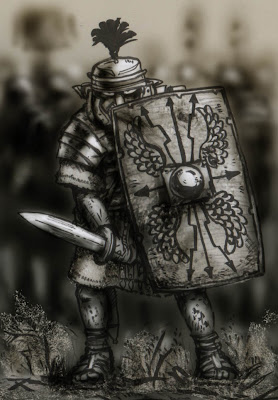 With Aquitania under his control, Tullus is now given the perfect platform from which to strike at the Province of Lugdunensis. This shows almost immediately when a large grain supply train destined for the Army of the Rhine, is intercepted and taken as it travels up from Italia.

Above, jubilant Legionaries return to Aquitania with a wealth of stolen grain and goods from Italia. They will be sorely missed by General Dewolfus and his hungry German Legions.

Once Secundus had recalled Flaccus, I was wondering when Tullus would get around to seizing Aquitania.

Tullus has also put himself in a great position from which to launch an attack that will split Secundus' forces in two. Of course, that attack could also put him between the jaws of Secundus' two armies ...

Meanwhile, Secundus seems to be getting shifted towards Alanicus' domain ...