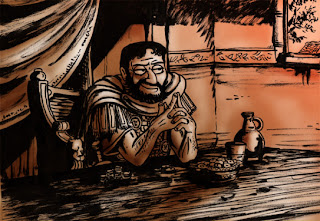 In this month the Gods truly shine on Tullus and his beleaguered troops. Not one, but two mines are discovered and opened. The first being of gems and the second, a huge gold mine in Africa.

Tullus feels secure enough now to offer Cyrenaica a large bribe, they of course flock to him with open arms. The Province of Cyrenaica borders that of Alanician Egypt, bringing the two super powers into direct contact.

The army of Tullus arrives at the border just as night falls and both armies loose sight of each other in the darkness, in the morning, the Alanicians are shocked by the size of the Tullician army and pray to their gods for re-enforcements. It appears that L.Cornelius Gracchus has brought the whole of Africa with him to fight for Tullus. 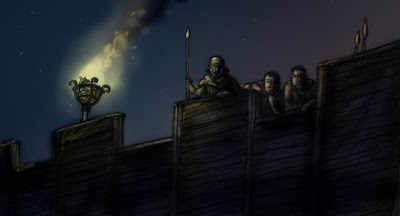 Members of the tiny garrison of the 6th Farrata, strain their eyes through the darkness to get a glimpse of the African forces under Gracchus.
Posted by Secundus at 8:28 pm

Is there going to be some breathing room for Secundus, or will somebody now cross the Mediterranean ...?

How about an updated map?