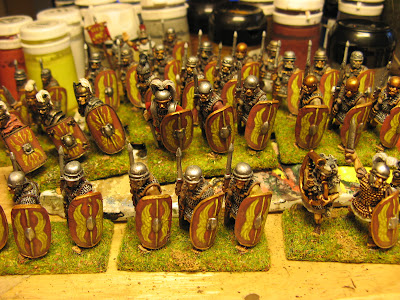 I took a huge gamble the other day and repainted a unit of the III Gallica to represent the 16th Flavia Firma. Alanicus's army of Anatolia is made up of Vexillations of the VI Farrata and the XVI Flavia Firma, so after a long time thinking about it, I decided to bite the bullet and do it. They used to be the sandy yellow seen in older photos but now they look completely different in a madder red. I gave them a very Caesarian motif to match their older style shields . 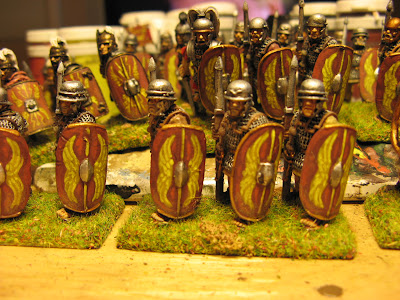 I still have three cohorts of III Gallica (a whole legion in the game) so I don't think they will be missed that much and I'm glad I went for it. The more variety in the colours and designs within the armies the better I think.

The colour and design was influenced by the unit of Evocati I had painted earlier, seen in the background with the white plumes.

I like to hand paint all my shields. It is tricky, but I find it so rewarding painting and designing my own stuff. Trawelling through the reference books is all part of the joy for me, then designing the colours etc is what the hobby is all about.

I find the transfers just toooooooooo tricky and they do my head in. Cutting them out and then soaking them in water, then sliding them about with tweezers...boy oh boy. In the time it's taken me to cut out one decal, I could of painted four shields by hand. Saying this, there is another studio that has made the whole process simplier. 'Little Big Man studios' has created a method of rubbing the designs onto the shield with a pencil, a little like a childs transfer set of long ago. This technique is great and a lot easier and takes a lot less time. I have bought some....but still prefer my way. Also i love the challenge.

Great job! It must be very good calligraphy practice, lol.