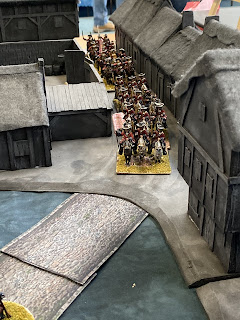 Well what a wonderful day I had today at SELWG. The first show I’ve been to in a very long time. I offered to help run a very clever game called ‘Moon over Sedgemoor’. The game was created by some old friends of mine in the Prince Rupert’s war gaming club. It is an intriguing looking game which involves removing tiles that represent the darkness of night.

The army of Monmouth struggles and stumbles forward in the dark trying to creep up on the sleeping royalists. As they pluck their way through various obstacles there is a chance they might make too much noise and alert the sentries. Dragoons patrols and other nasties await under certain tiles, as well as friendly peasants etc who could help you. It’s a very clever game and it was very fun to run. The combat is a very stripped down version of Donnybrook for ease and speed of play. It was nice to see players enjoying it and especially one little girl who came back three times with her dad. 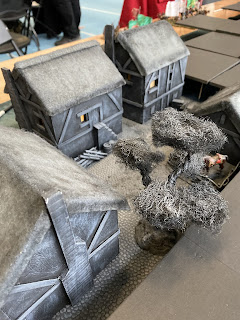 The terrain was made by a talented member of the club and was painted in monotone colours to represent a night time landscape. I have to say it looks great and is very atmospheric with the lights in the house windows flickering away. 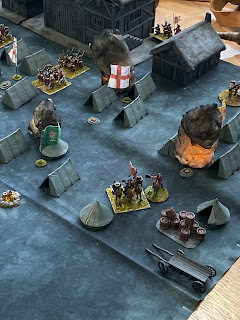 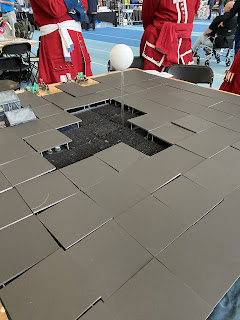 The wheat field is the only area open for the players to see. It’s a quicker route to cross but very noisy so beware. 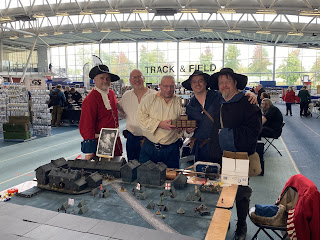 Redcoats and Rebels come together and all is forgiven as the game is awarded best in show. 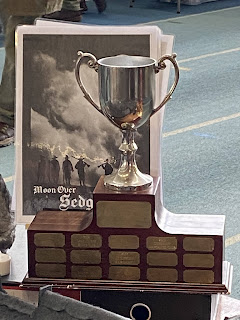 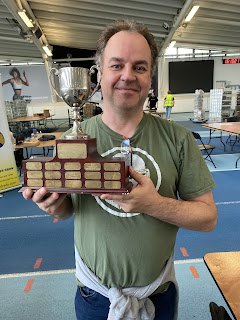 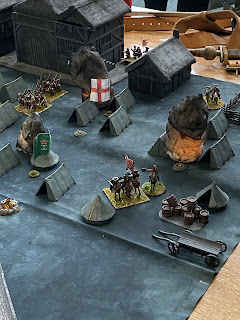 Rebels have reached the camp and have used the element of surprise to cause havoc. Flickering candles in the fire explosions was another nice touch and added to the nighttime ambience. 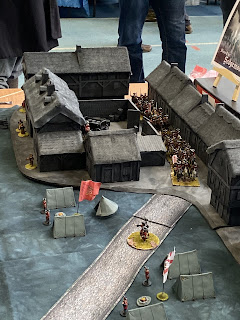 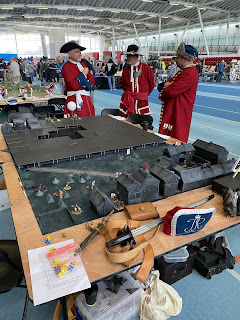 I think the uniforms also added to the fun. Rupert’s have re-enacted the Monmouth rebellion many times at events, as they can double as the 1st Foot guards of James II, so it’s a subject very close to their hearts.
Posted by Secundus at 8:51 pm

The game was a very worthy winner. The terrain ideas were innovative, your interaction with the participation players was great. It was a benefit to our show that such a good game was bought along. Thank you.
Tony Rodwell
SELWG President

Oh wow, thanks Tony, I have to say I had a real blast today. I really had a fun time and it was great to be out again and seeing old faces. I even managed to say hello to a couple of other Bloggers I had met years ago. Really great day out so many thanks to you also for making it happen.

Great idea for a game an I like the monochromatic terrain to accentuate the night.

A well-deserved win. I love the colour palette of the terrain as much as anything else...inspired. Great meeting you btw.

Like wise Lee is was good to finally meet you. I’ve been making my way through your YouTube channel, very good stuff. See you on the next one.

Loved the game, it was a well deserved winner. T'was great to meet you too, even though you made me wear the hat!

Haha when I saw your red t-shirt I thought you would make a great Grenadier and I was right! Great to see too.

Good to see you on Sunday! Not sure how I missed the post then.

A deserving win for your group. :)

Great idea! Somehow I missed this on the day.

I never travel the M5 landscape (past the Sedgemoor services) without thinking about this desperate battle.