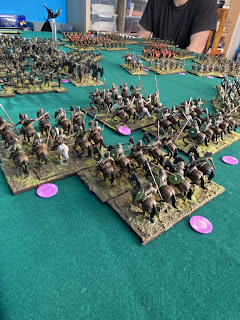 I had another great day today at a friends house playing a very large game of Oathmark. This was very fun battle of the Pelennor fields based on events from the book rather than the film. It was nice to see all the different factions of Gondor and to see Aragon come in with the rangers towards the end. 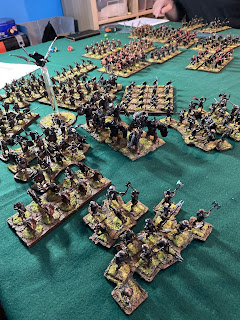 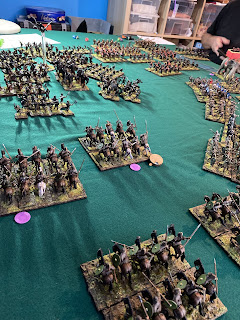 It was quite a close battle but the Lord of the Nazgul with his black breath was a very hard unit to beat. In the end we ran out of time and on adding up the victory points, the forces of evil won out. 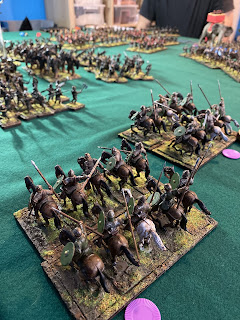 Riders of Rohan pour onto the field. The first three units engaged infantry and trolls head on with good results. They had two attack dice each and sowed merry havoc among the foul folk of Mordor. However, it was the supporting fourth unit that managed to hang back then inflict devastating results in two flank attacks that made the day for me. It reminded me a lot of Chess with a queen in reserve. You know you are going to get flanked and attacked in turn so you have to bide your time until the right moment occurs to attack. The unit was eventually lost but not before it had swept two large orc units from the field. It’s the weighing up of the sacrifice that felt very chess like. 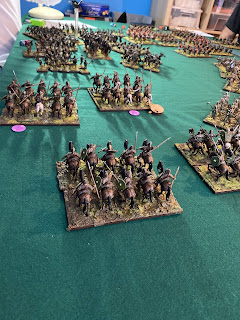 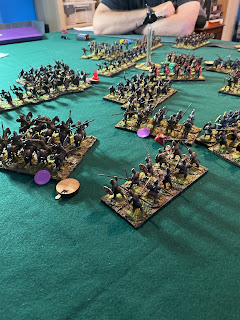 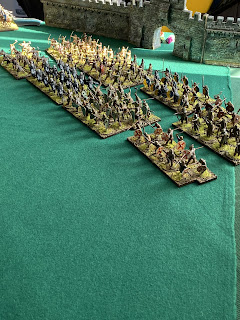 It was a glorious battle to behold with two huge forces on each side. All the figures were plastic historical ones adapted into the various fictional units. There were of course lots of plastic fantasy orcs, goblins and trolls too. I especially loved the Arab heavy cavalry painted up as Haradrim, they looked the business!  It’s a tip I made note of if I ever get around to gaming the last stand of Dain Ironfoot. 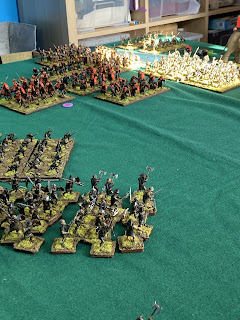 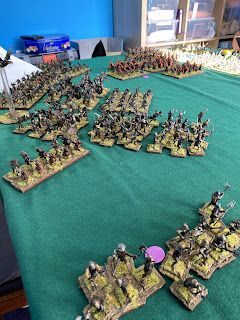 Labels: lord Of The Rings, Oathmark

Nice to be able to do a big game like that, and see all your hard work on the table.

Very impressive looking game with all those units on the table. It is always satisfying seeing you hard work arrayed as it should be.

I’m afraid the hard work wasn’t mine but a friends. It was a glorious sight though and a lot of hard work hard been put into all the armies for sure. I think it’s the biggest painted fantasy battle I’ve played so far. It dwarfs my Oathmark kick around last year by many times. It was based on an old article in a wargames magazine, that’s where the first idea had come from, then enlarged some what… as you do.

That's one of the largest games I've seen played with the rules! Hope it went smoothly.

Hi Joe, yes it went very smoothly! We had four players and the game ticked along nicely. In the end we ran out of time so had to call it by victory points. To be honest though, the Lord of the Nazgul was so powerful there was nothing that could really deal with him and his poison breath. Even Gandalf would have been dealt with, luckily for him the game ended before they met. Yes great game and a fun day.