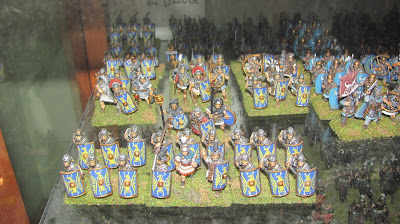 After looking through the Clash Of Empires rulebook today and seeing their examples, I thought I would redesign the look of my Cohorts.
My Legions used to be made up of 3 x 24 Legionaries, but now I have restructured them into 4 x 18. They look a lot better and feel a lot more Roman too. The chequer board formation also adds it's self to some of the Legionary rules within the game, like giving unit support to forward units. 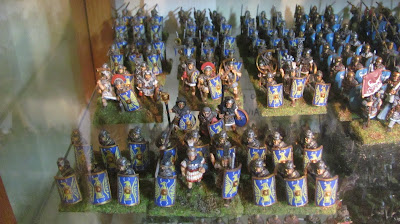 The first Cohort at the front with the Eagle base behind it. Followed up by three more Cohorts, this is my new Legion look. In game terms the Legion obviously can't be too big, but I like the idea of lots of men and think this grouping has the right number and feel to it. 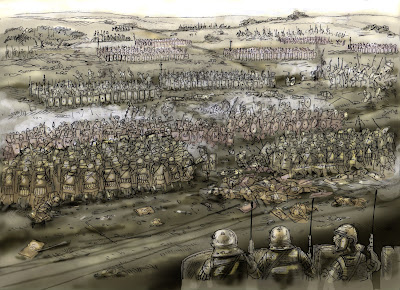 The left over Eagle stand will join one of these smaller 18 man cohorts and turn it into the first Cohort with it's higher stats and greater man power. We plan to actually turn the Eagle stand (Primus Pilus, Eagle bearer, Vexillium standard) into a Sub-commander in the game. 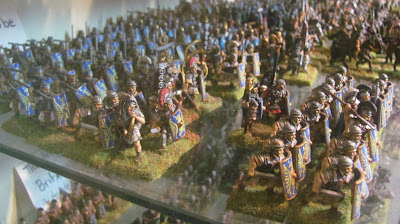 Anyway I'm very happy because the units look 'Right' now and should contrast nicely against the larger 40-50 man war bands, again bringing more realism to the look of the game.
Posted by Secundus at 10:32 pm

What´s the guy saying to his mate on the left?, "I don´t fancy the away sides chances!!"
Cheers
paul

Great looking Romans - so they were based for WAB before, I take it? They look great in any configuration. Dean

The Legion looks great! You keep me inspired to paint my own Romans and Celts!

What do you make of the Clash of Empires Rulebook?

Coming from a Warhammer background and having the (old version 1.5) Warhammer Ancient Battles Rules, I am having a hard time figuring out which rules to go with.

It is a bit like Napoleonics. So many damn rules that I avoided buying any.

I am finally buying a second hand copy of Lasalle after seeing it is one of the rules to stick around and remain popular.


Rulebooks just get so expensive to buy just to see if the rules might be any good!

Looking good! I like units to be organised with odd numbers of elements, so that the command stand can be in the middle, as you've done.

My name is Kirsten Williams and I work with content for calculatem.com http://www.calculatem.com/ . We are now conducting a campaign towards blogs and for that reason, I am trying to get in touch with the person in charge of content and ads primarily on blogs.

Is that you, or is there someone else I should speak to? Thanks for your time.

Hi,
I listed you for the Stylish Blogger Awards. See details here: http://javieratwar.blogspot.com/2011/05/stylish-blogger-award.html
Thank you!

Is there no end to your talents you Stylish Blogger (again)

Even my wife likes your cartoons!

Go with CoE. It is WAB in style and flavour, but considerably improved AND it is being given the complete support that WAB never got, by the two very devoted guys at GEG (Stuart and Mark, if you a reading this, you are fantstic fellows!). Lists and Supplements are being worked on as we speak - many already released online - and some of the old WAB stalwarts, the writers of the WAB Supplements, are now also involved in CoE. CoE is WAB as it should have been. Go with CoE. Go on, go on, go on, go on, go on, go on, go on. Heheh.

Anyone who knows me knows that I was an avid supporter of WAB until FW took over - and now I am even more passionate about CoE! :D

Secundus and I have always used multibases for our figures, so Secundus's legions were never technically "based for WAB" even though that is the only ruleset previously used. They slip into CoE quite seamlessly, barring the occasional rehshuffle of unit sizes.

Hey I know I asked you this earlier but I was wondering if I could borrow one of your cartoons for a honorerium/memorium tshirt(s) for an old wargamer or two -One who died suddenly from liver cancer just last week and another who is a teacher and convention coordinator for 15 years (also suffering from ill health) The group is a non profit wargame convention who had a bad director last year for the 20th anniversary convention that was supposed to furnish an appropriate tshirt celebrating Dr Birdseye's contributions. Both Schaller (deceased US Marine) and Dr. Birdseye served in the US military. Schaller did 3 tours in Vietnam. I am going to post the two Roman cartoons on my blog that I am interested in using. Personalized cartoons would be better but I know your very busy. warplay was Fred's website the ASWA club has pictures of him on it. Hope to hear from you. The new year has scertainly started out strangely for me. Cheers David