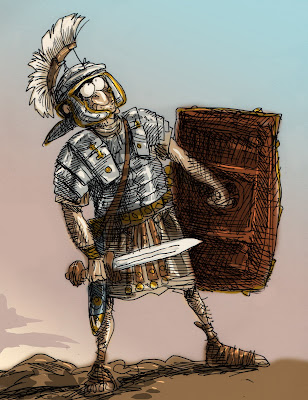 After a lot of research this morning, I decided to repaint the XIIII helmet crests red. This was for a couple of reasons, the first was that I found the actual web site for the XIIII re-en actors and they carry red plumes. The second was that I thought red would make them look more Legionary rather than Praetorian.
However, after spending half an hour repainting...I have to say I think I preferred them as they were, so I'll be painting them back. The white plumes tended to stand out a lot better where as the red is instantly lost. They are meant to be elite Legionaries who wear their plumes to mark that fact, so maybe white is better after all. 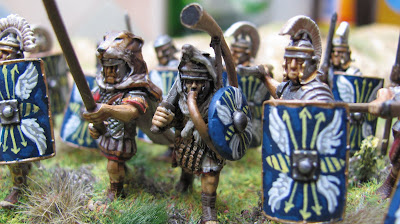 This is the XIIII before the hair dying session. I think I prefer these. 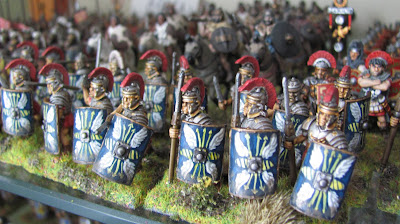 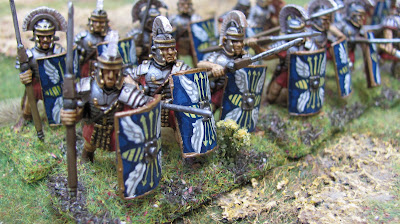 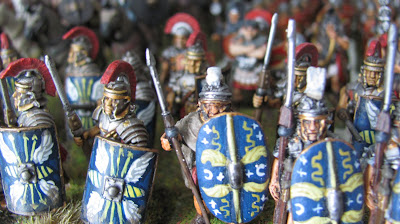 Above can be seen a Warlord Games Praetorian, Gripping Beast Praetorian and Foundry Praetorian. 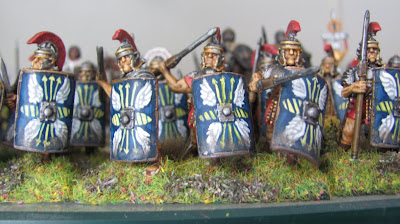 At least one good thing did come out of this mornings work and that's that I got to muddy up the shields a bit. Which I do Like. 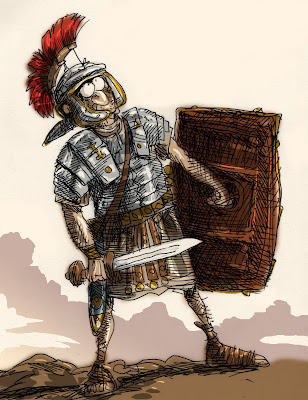 I have to say that I also prefer the white crests! Looking good.

... and the rectangular scuta are great!

I like the red crests with the blue shields, but hey, they're your figures.

Awesome blog by the way!

ARR Sorry Dan, I sat up all last night and painted them back to white again.

Scarlet red plumes are so Hollywood, cliche and worst of all, there isn't any evidence for them. Re-enactors use bright red plumes because that is what is expected by the plebs, not because it is accurate.

The Romans did use crests and plumes, as many of the helmet finds have holes for plume or crest holders. They used feathers or horse hair for said plumes and, if they dyed the horse hair at all, would have done so with natural vegetable dyes.

However, vegetable dye does not work very well on horse hair. Therefore it is probable that horse hair crest/plume colours were limited in scope and restricted to those colours that actually come out well with vegetable dyes; namely white, black or red-brown (NOT red proper!). Arrian speaks of yellow plumes, but he is describing the hippika gymnasia and the plumes are likely feathers.

Your white plumes are both beautiful and most appropriate. Far more suitable - and nicer looking - than the scarlet red. Nicely done, I'm glad you changed them back. :D

Arrian's "Yellow" plumes could be no more than natural undyed blonde horse hair. Interestingly enough, black and dark-red brown are also natural horse hair colours that needn't necasarily have ben dyed in any way. The "white" horse hair could just have been the bleached hair given no further treatment. So perhaps these "dyed" helmet crests weren't dyed at all? For a mass produced product that would certainly make sense.